DISCOVER THE HISTORY OF THE NYC MARATHON 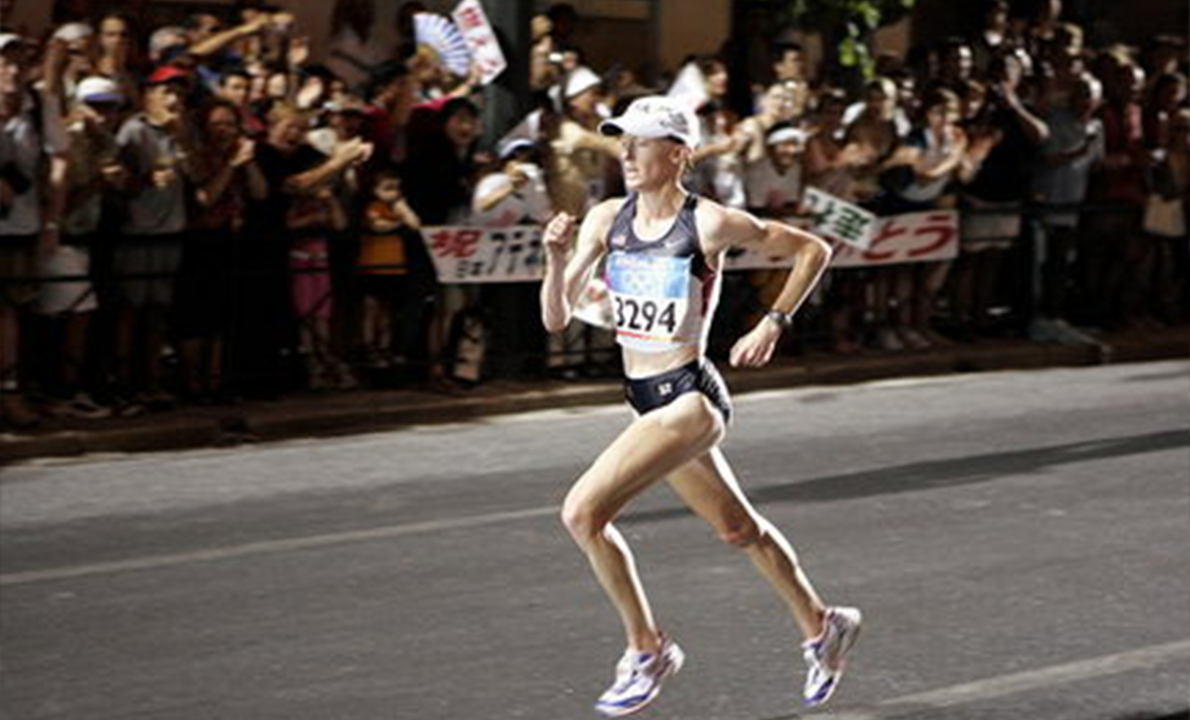 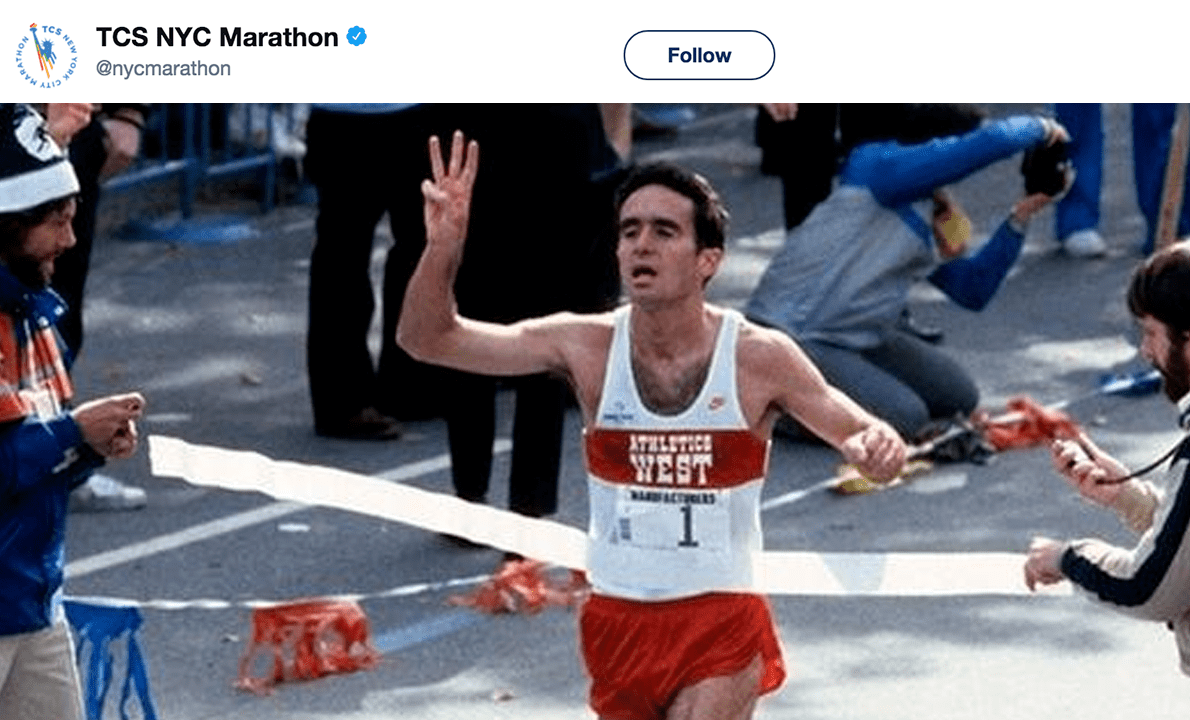 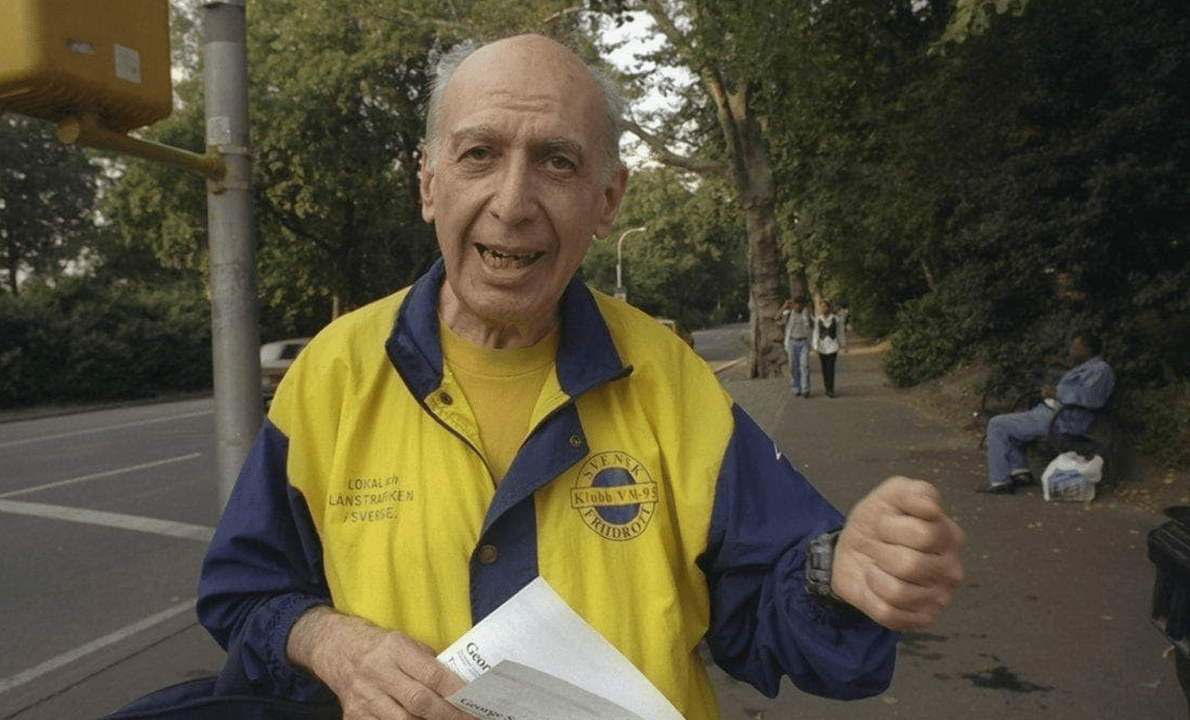 At first, the plan was just to combine celebrations of the United States’ bicentennial anniversary with the five-borough marathon. No one—not the race organizers, or New York City mayor Abraham Beame office—talked about the marathon becoming an annual fixture. But what was immediately apparent was that if a major marathon in New York City was to be pulled off and include all five boroughs, Fred Lebow would have to be in charge. Luckily he didn’t hesitate.

As word of the five-borough marathon spread in the summer of 1976, it created a never-before-seen excitement for running in all corners of the city. Soon, Lebow had secured the appearances of Frank Shorter and “Boston” Bill Rodgers. Shorter signed up "[Just] to see if the police could close down New York City’s streets for a foot race." [7]. By the day of the race, as runners assembled at the startline at the Verrazano Narrows Bridge on a cloudy, chilly morning in October, there was a sense of expectancy and excitement. Helicopters hovered overhead, almost drowning out the noise when the Mayor fired the starter’s gun. 2,090 entrants participated. [8].

The success of this event cemented the five-borough route as the default course, and annual iterations were the result. Since 1976, the NYC Marathon has grown in popularity and prestige. Stories abound: Rodgers became a four-time winner of the event from 1976 to 1979. In 1980, NCAA track champion Alberto Salazar boldly predicted that he would run sub-2:10 in his first marathon; he made good on his promise by winning in 2:09:41, the fastest-ever debut by an American. A year later he set a new marathon world record in New York when he ran 2:08:13.

The Cherry Tree Marathon was the closest blood-relative to today’s New York City Marathon, as it was hosted by the New York Road Runners (NYRR), who had organized the race a year prior in 1958. Despite running annually until 1970, the Cherry Tree Marathon wasn’t without its own difficulties. In 1963, runners faced near–blizzard conditions. Once marathon running became more popular in the late-1960s, it was decided that a new marathon was needed to represent the identity of New York City and replace the Cherry Tree. This time the marathon would take place in the fall, and NYRR members Fred Lebow and Vince Chiappetta were just the men for the job.

Originally, the New York City Marathon wasn’t supposed to be such a big deal. It was held entirely in Central Park in 1970, and of the 127 registrants of the inaugural event, only 55 men finished; the sole female entrant dropped out. Winners were awarded inexpensive wristwatches and recycled baseball and bowling trophies. The entry fee was $1.00 and the total event budget was $1,000. [5].

But the New York Marathon changed within six short years, thanks to the appearance of one political shaker and mover: George Spitz. Spitz was a try-everything politician who ran in the Boston Marathon and began asking friends, “If Boston can have a marathon on its streets, why not New York?” Lebow’s small event that looped four times around Central Park didn’t fit with the race Spitz had in mind: a marathon that would go into all five boroughs. At first, no one warmed to his vision, not even Lebow  (who had become president of the New York Road Runners, which had grown to be the largest running organization in the city). But Spitz was persistent and had friends in high places. Soon, Percy Sutton, the Manhattan borough president gave support to the idea. And when Sutton secured a $25,000 commitment from influential real-estate moguls Jack and Lewis Rudin, there was no turning back. [6].

Interestingly, Shorter also plays a part in the history of the New York City Marathon. Decades after Hayes won in 1976, Fred Lebow enticed Shorter to run to professionalize the event and boost sign-ups.

But let’s not get ahead of ourselves. New Yorker's were running marathons from the time of Johnny Hayes all the way through. The Port Chester Marathon, which began in Manhattan and ended in Westchester County, was a major stop on the American running circuit from 1925 to 1941. In 1948, another marathon was held to commemorate the 50th anniversary of the consolidation of New York City. Organized by the Queens Committee for the Commemoration of the Golden Anniversary of the City of New York, the course ran from Idlewild Airport in Queens, now known as the John F. Kennedy International Airport, to the world's fair grounds at Flushing Meadows Park. Then in February 1959, the Cherry Tree Marathon, held on George Washington’s Birthday, started and finished in Macombs Dam Park in the Bronx, near Yankee Stadium. [4]. 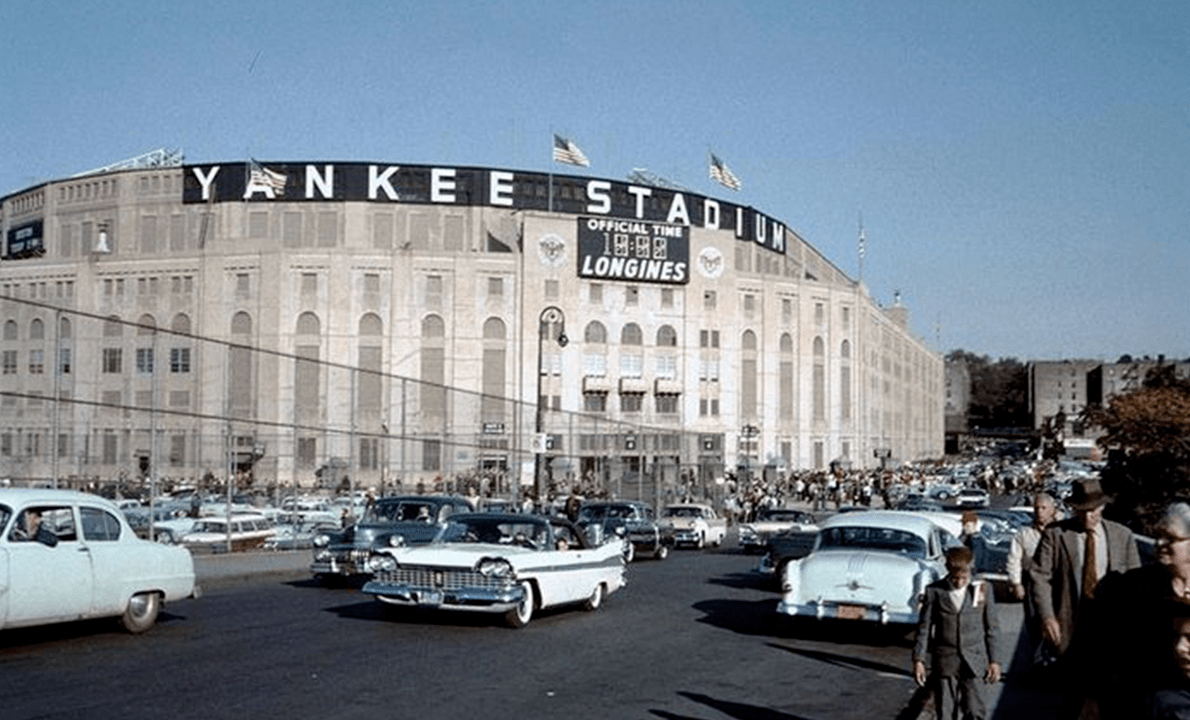 Soon after the Olympic 1896 event, however, marathon-mania became the rage in the U.S., and cities everywhere became hubs for their own variations of the distance. And although the New York City Marathon is now the largest such race, it is not the oldest. The Boston Marathon, established 1897, holds that claim. [2].

The modern marathon as we know it today dates back to the first modern Olympics in Athens in 1896. The course back then tried to mirror the apocryphal story of Pheidippides, who supposedly in 490 B.C. raced 26 miles back to Athens from Marathon to give word of the Greek military win over Persia. In fact, the 26 mile-385 yard distance wasn’t clearly defined until 1921—instead, the first “marathon” races encompassed about 40 kilometers (25 miles). [1]. 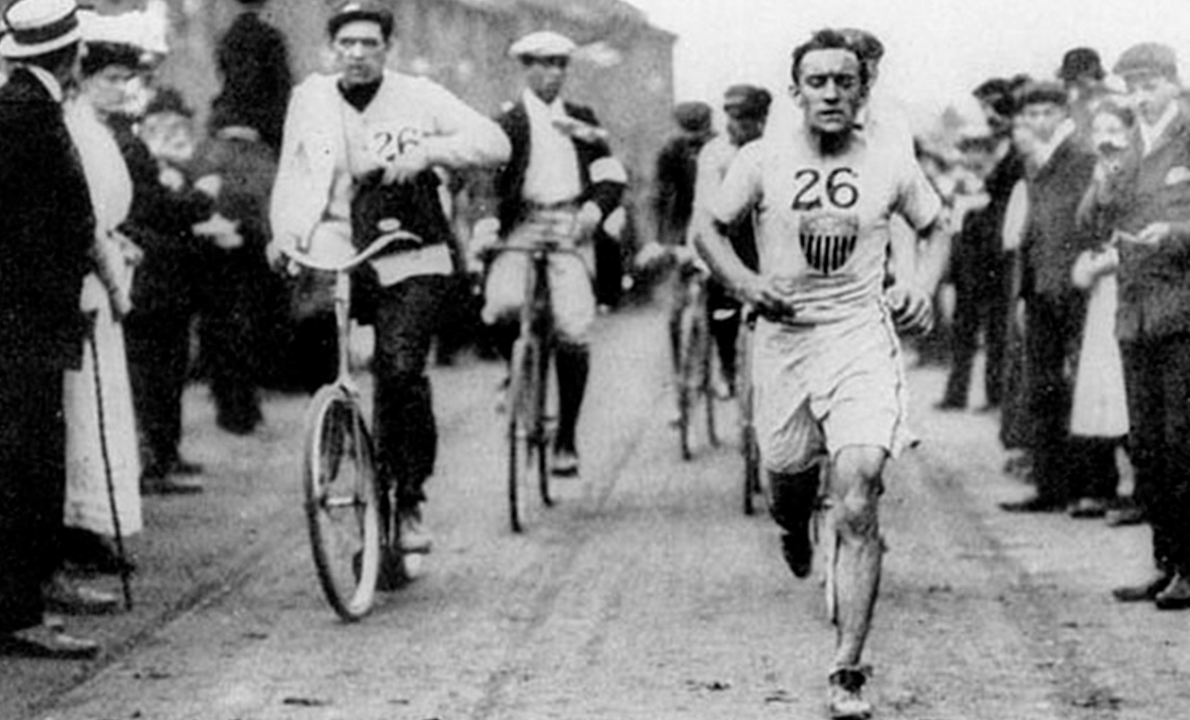 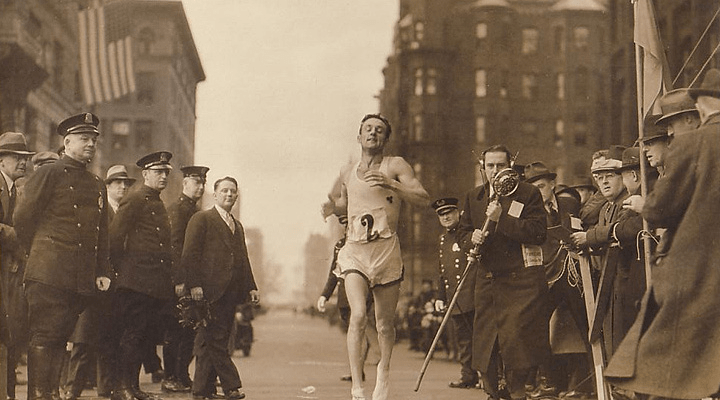 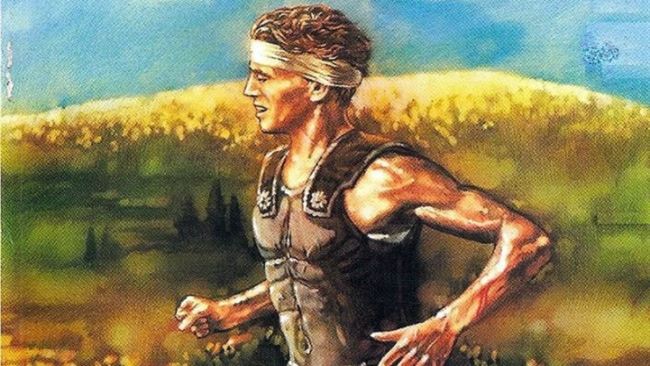 To truly understand the New York City Marathon, before speaking about the five boroughs; the 50,000+ participants, course and world records, prize purses, or really anything else--it helps to know its history. 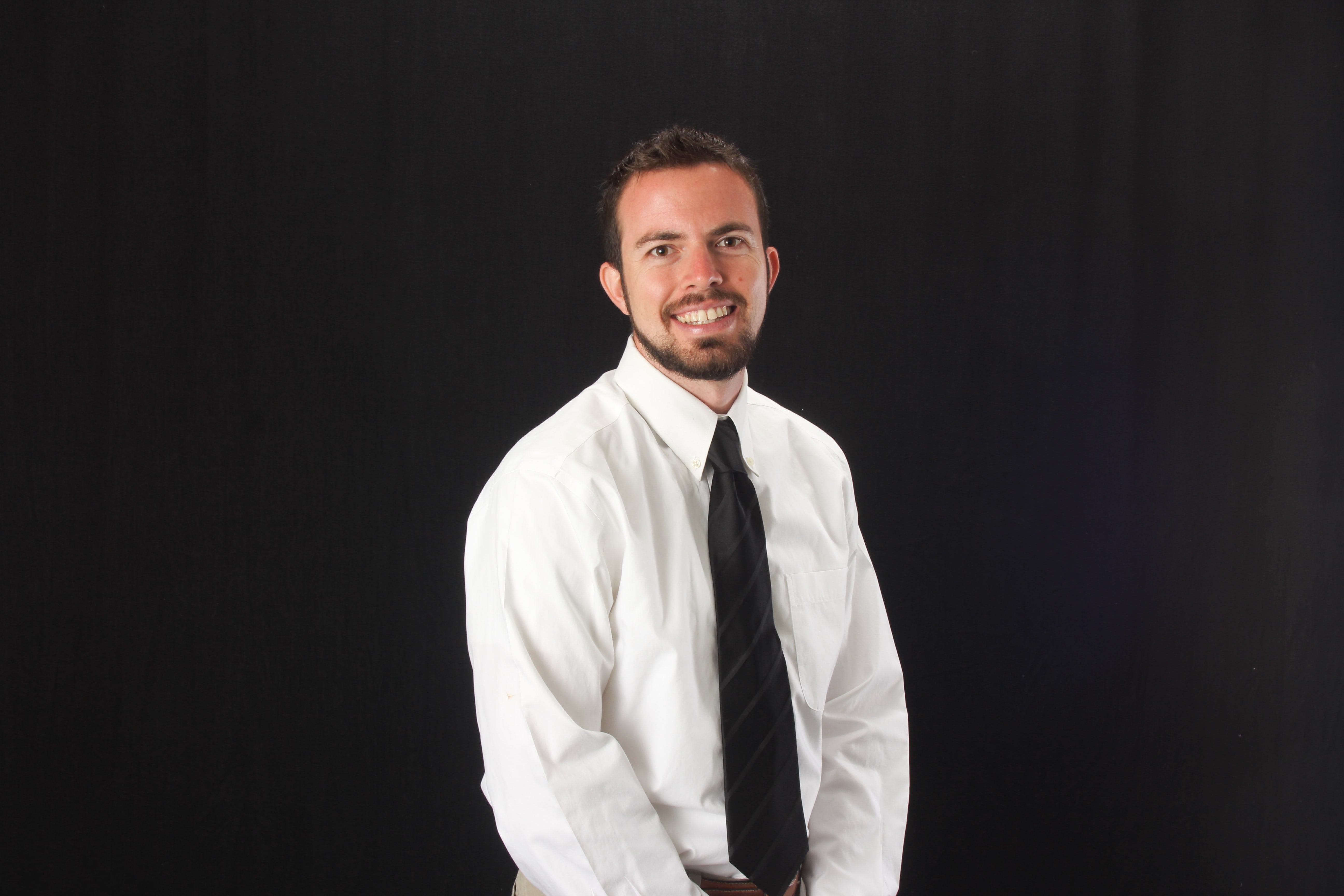 Coach Andrew Hutchinson is a NFHS-qualified high school athletics coach. He is the author of "The Complete History of Cross Country Running." Coach Hutchinson is located in Novato, California. He offers online training plans and private running lessons in Marin County and the Bay Area.

The first marathon in metropolitan New York occurred in Yonkers, across the city line in Westchester County in November 1907. That year, eventual 1908 Olympic gold medalist Johnny Hayes won the race, which was only 25 miles. The New York native was an employee of Bloomingdale's, and he trained for the event on the roof of the store at night on a cinder–path track installed by the company. [3]. At the 1908 Olympics, Hayes became the last American Olympic gold medalist to win the marathon until 1972, when Frank Shorter won.

ING, a global financial services company, became the marathon’s first title sponsor in 2003 and joined with the NYRR to initiate grassroots running and fitness programs among the city’s youth. Today, ING and a gamut of other companies pour generous resources into the event. During the race, volunteers will hand out 62,370 gallons of water, 30,000 PowerBars, drink 40,000 cups of coffee, and handle 32,040 gallons of Gatorade. 80 photographers will snap 450,000 photos of racers. And the 41 medical aid stations along the way will be outfitted with over five tons of ice, 13,475 adhesive bandages, and 390 tubs of Vaseline. [9].

The New York City Marathon, which has run continuously since the inaugural event in 1970 (save for 2012, when hurricane Sandy hit), is by far one of the most historic and exciting running events in the United States. With strong international fields, large prize purses, and a long waiting list there’s no wonder why. It’s just clear that like this special event, marathon-mania in the United States won’t be slowing down anytime soon. [10].

In 1981, ABC Sports began televising the race, and in 1982 the marathon became the highest–rated sports show of the day for the network. A waiting list was instituted in 1982, and today over 105,000 entrants compete in a lottery system for roughly 39,000 slots (a portion of the entrants guarantee their participation by running in support of affiliated charity). Racers come from all 50 states and more than 100 countries, and it is a custom for some to dress in elaborate costumes. The behind-the-scenes statistics for the New York City Marathon are also impressive. The NYRR have over 100 staff working year–round on the marathon. More than 6,000 volunteers participate on race day; 2,500 media credentials are issued.

Grete Waitz of Norway, a track Olympian who’d never run farther than 12 miles, also set a world record in her marathon debut. She ended up winning the NYC Marathon nine times. Shortly before the race’s 25th anniversary in 1994, after Lebow’s passing, Allan Steinfeld took over as race director. Gérman Silva of Mexico famously took a wrong turn into Central Park in the 26th mile that year and came back to win, while women’s champ Tegla Loroupe, a Kenyan, became the first female African winner of a major marathon when she crossed the line in first.

The marathon has always been an exercise in community spirit, and that was especially true in November 2001, less than two months after the September 11 terrorist attacks. The race became a symbol of hope and renewal for participants, spectators, and all New Yorkers. Patriotism ran high as Deena Drossin (now Kastor) clocked 2:26:58, the fastest debut by an American woman, to win the event title.